Get some historical perspective at Tombs of the Kings and Kourion. Escape the urban bustle at Akamas Peninsula National Park and Coral Bay. Go for a jaunt from Paphos to Limassol City to see Kolossi Castle about 46 minutes away. There's much more to do: delve into the distant past at Kato Paphos Archaeological Park, take in the dramatic natural features at Aphrodite's Rock, examine the collection at Byzantine Museum, and see some colorful creatures with a scuba or snorkeling tour.

To see traveler tips, more things to do, maps, and more tourist information, use the Paphos driving holiday website.

London, UK to Paphos is an approximately 8-hour flight. You'll lose 2 hours traveling from London to Paphos due to the time zone difference. Traveling from London in March, expect Paphos to be somewhat warmer, temps between 22°C and 11°C. Finish your sightseeing early on the 26th (Tue) so you can drive to Latchi.
more less

Take a trip to the west coast of Cyprus and immerse yourself in the tranquil atmosphere of the scenic town of Latchi, a perfect holiday destination for those who want to step away from the beaten path.

Start off your visit on the 27th (Wed): explore the ancient world of Soli Ruinen, then learn about winemaking at Sterna Winery, and then take a memorable tour with George's Watersports - Boat Hire Latchi. On your second day here, hike along Aphrodite Trail, then trek along Baths of Aphrodite, and then take in the exciting artwork at That Nice Shop.

Traveling by car from Paphos to Latchi takes an hour. Alternatively, you can take a bus. In March in Latchi, expect temperatures between 22°C during the day and 11°C at night. Cap off your sightseeing on the 28th (Thu) early enough to go by car to Kyrenia.
more less

Things to do in Latchi 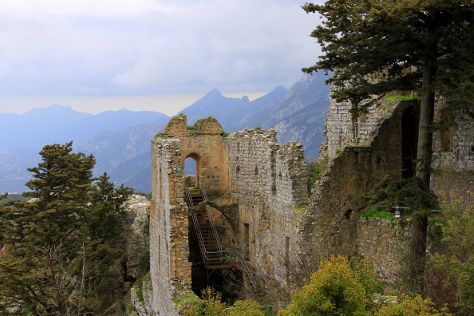 On the 29th (Fri), explore the historical opulence of Saint Hilarion Castle, contemplate the waterfront views at Kyrenia Harbour, then steep yourself in history at Kyrenia Castle, and finally contemplate the long history of Bellapais Monastery.

Getting from Latchi to Kyrenia by car takes about 3 hours. Other options: take a bus. Expect a daytime high around 23°C in March, and nighttime lows around 9°C. Wrap up your sightseeing on the 29th (Fri) early enough to drive to Protaras.
more less

Church of Saint Lazarus and Hala Sultan Tekke will appeal to history buffs. Get in touch with nature at Scuba & Snorkeling and Fig Tree Bay. There's much more to do: enjoy the sand and surf at Nissi Beach, pause for some serene contemplation at Church of Profitis Elias, get great views at Cape Greco National Forest Park, and explore the activities along Konnos Bay.

To find photos, where to stay, more things to do, and tourist information, refer to the Protaras trip planner.

Traveling by car from Kyrenia to Protaras takes 2 hours. Alternatively, you can do a combination of bus and car. In March, daily temperatures in Protaras can reach 23°C, while at night they dip to 10°C. Finish your sightseeing early on the 1st (Mon) to allow enough time to travel back home.
more less