Do some cultural sightseeing at Salamis Ancient City and Lala Mustafa Pasha Mosque. You'll discover tucked-away gems like Famagusta City Walls and Landa Beach. Step out of Ayia Napa to go to Famagusta and see St Barnabas Monastery and Icon Museum, which is approximately 1 hour away. There's lots more to do: see some colorful creatures with a scuba or snorkeling tour, take in the pleasant sights at Cape Greco National Forest Park, explore the world behind art at Traditional house, and pause for some serene contemplation at The Church of the Panagia.

For ratings, reviews, and other tourist information, refer to the Ayia Napa trip planner.

Bengaluru, India to Ayia Napa is an approximately 14.5-hour flight. The time zone difference moving from India Standard Time to Eastern European Standard Time is minus 3.5 hours. Expect a bit cooler temperatures when traveling from Bengaluru in May; daily highs in Ayia Napa reach 31°C and lows reach 19°C. Finish your sightseeing early on the 19th (Tue) to allow enough time to drive to Paphos.
more less

Famagusta, Traditional house, The Church of the Panagia
Find places to stay May 15 — 19:
Hotels on TripAdvisor
Homes on Airbnb
Highlights from your trip
©
Must see
Famagusta City Walls 4.4
©
Must see
Landa Beach 4.8
©
Must see
Salamis Ancient City 4.4
See timeline 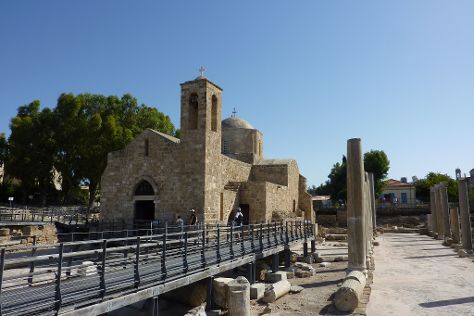 On the 20th (Wed), pause for some serene contemplation at Church of Agia Kyriaki and post St. Paul, take in the spiritual surroundings of Panagia Chrysopolitissa Church, then delve into the distant past at The House of Dionysus, then explore the historical opulence of Paphos Harbour Castle, and finally step aboard Edro III Shipwreck. Get ready for a full day of sightseeing on the 21st (Thu): make a trip to Saint Paul's Pillar, then contemplate in the serene atmosphere at Chrysorrogiatissa Monastery, and then relax and rejuvenate at some of the best spas.

You can drive from Ayia Napa to Paphos in 2.5 hours. Another option is to take a bus. In May in Paphos, expect temperatures between 29°C during the day and 18°C at night. Cap off your sightseeing on the 21st (Thu) early enough to go by car to Nicosia.
more less

Chrysorrogiatissa Monastery, Edro III Shipwreck
Find places to stay May 19 — 21:
Hotels on TripAdvisor
Homes on Airbnb
Highlights from your trip
©
Must see
Church of Agia Kyriaki and post St. Paul 4.9
©
Must see
The House of Dionysus 4.7
©
Must see
Panagia Chrysopolitissa Church 4.8
See timeline

Kick off your visit on the 22nd (Fri): discover the deep blue sea with a scuba or snorkeling tour, stroll through Mackenzie Beach, and then delve into the distant past at Church of Agia Irini. On the 23rd (Sat), you'll have a packed day of sightseeing: take an in-depth tour of The Cyprus Museum, don't miss a visit to Buyuk Han, then don't miss a visit to Selimiye Mosque, and finally get engrossed in the history at Ancient Shipwreck Museum.

Start your trip to Nicosia by creating a personalized itinerary on Inspirock.

Drive from Paphos to Nicosia in 2 hours. Alternatively, you can take a bus. Traveling from Paphos in May, you will find days in Nicosia are a bit warmer (33°C), and nights are about the same (19°C). Finish up your sightseeing early on the 24th (Sun) so you can travel back home.
more less