©
Naples is the capital of the Italian region Campania and the third-largest municipality in Italy after Rome and Milan. Explore hidden gems such as Gesu Nuovo Church and Museo e Real Bosco di Capodimonte. Do some cultural sightseeing at Pompeii Archaeological Park and Duomo di Napoli. Go for a jaunt from Naples to Ottaviano to see Vesuvio National Park about 38 minutes away. There's much more to do: steep yourself in history at Cimitero delle Fontanelle, see the interesting displays at Museo Archeologico Nazionale di Napoli, brush up on your military savvy at Galleria Borbonica, and admire the masterpieces at Museo Cappella Sansevero.

Use Inspirock's suggestions to plan your Naples trip and find the best activities and attractions for your vacation.

Baden-Baden, Germany to Naples is an approximately 6-hour flight. You can also take a train; or drive. In April, Naples is a bit warmer than Baden-Baden - with highs of °C and lows of °C. Finish up your sightseeing early on the 16th (Mon) so you can catch the ferry to Capri.
more less

Things to do in Naples

The island of Capri encompasses all the magical allure of the Mediterranean--dramatic blue waters, lush mountainous landscape, and picturesque island villages.

Get some cultural insight at Villa San Michele and Santa Maria a Cetrella. Explore hidden gems such as Monte Solaro and Via Krupp. And it doesn't end there: pause for some serene contemplation at Chiesa San Michele, see the interesting displays at La Bottega dell'Arte di Sergio Rubino, tour the pleasant surroundings at I Faraglioni, and kick back and relax at Marina Piccola.

To plan Capri vacation without wasting time, ask Inspirock to design an itinerary.

Traveling by ferry from Naples to Capri takes 1.5 hours. April in Capri sees daily highs of °C and lows of °C at night. Finish up your sightseeing early on the 18th (Wed) so you can travel to Forio.
more less

Things to do in Capri 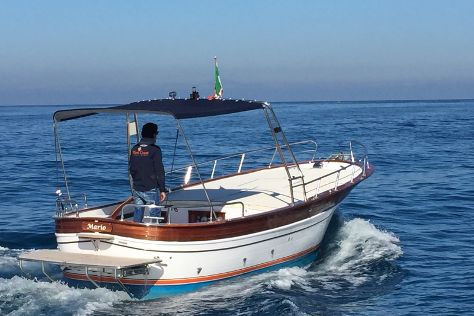 ©
Start off your visit on the 19th (Thu): pause for some serene contemplation at Chiesa del Soccorso, thenwitness a stunning natural landmark at Baia di Sorgeto, and then steep yourself in history at Sant'Angelo (Serrara Fontana). Get ready for a full day of sightseeing on the next day: choose your vessel at West Coast Ischia - Boat Rental.

To see other places to visit, where to stay, photos, and tourist information, use the Forio road trip planning app.

Getting from Capri to Forio by ferry takes about 2 hours. In April, daytime highs in Forio are °C, while nighttime lows are °C. On the 20th (Fri), wrap the sightseeing up by early afternoon so you can travel to Matera.
more less

Things to do in Forio

Famous for its resemblance to the ancient settlements of Jerusalem and Cappadocia, Matera remains one of the oldest inhabited cities in the world.

Start off your visit on the 21st (Sat): make a trip to Palombaro Lungo, view the masterpieces at Massimo Casiello - Tornitura Artistica del Legno, pause for some serene contemplation at Church of Santa Maria de Idris, thenappreciate the extensive heritage of Sassi di Matera, thentake in the architecture and atmosphere at Cattedrale di Matera, and finally delve into the distant past at Cripta del Peccato Originale. Here are some ideas for day two: don't miss a visit to Casa Noha, thentour the pleasant surroundings at Casa Grotta di Vico Solitario, and then steep yourself in history at Parco delle Chiese Rupestri di Matera.

For where to stay, photos, reviews, and tourist information, read Matera sightseeing tool.

Things to do in Matera