Take a break from the city and head to Coral Bay and Lara Beach. You'll visit kid-friendly attractions like Tombs of the Kings and Akamas Peninsula National Park. Plan for a day of cool, family-friendly fun on the 22nd (Thu) at Paphos Aphrodite Waterpark. Next up on the itinerary: explore the striking landscape at Aphrodite's Rock, sample the tasty concoctions at Aphrodite's Rock Brewing Company, explore the ancient world of Kato Paphos Archaeological Park, and take a pleasant ride with Horse Riding Paphos - Eagle Mountain Ranch.

To find where to stay, maps, traveler tips, and more tourist information, you can read our Paphos day trip site.

Tel Aviv, Israel to Paphos is an approximately 4.5-hour flight. Traveling from Tel Aviv in August, expect slightly colder with lows of 26°C in Paphos. Finish your sightseeing early on the 22nd (Thu) to allow enough time to drive to Protaras.
more less

You'll get in some beach time at Nissi Beach and Fig Tree Bay. Step out of the city life by going to Konnos Bay and Cape Greco. The adventure continues: see some colorful creatures with a scuba or snorkeling tour, pause for some serene contemplation at Church of Profitis Elias, kick back and relax at Makronissos Beach, and contemplate the waterfront views at Blue Lagoon.

To see ratings, more things to do, other places to visit, and tourist information, use the Protaras trip planner.

Drive from Paphos to Protaras in 2.5 hours. Alternatively, you can take a bus. August in Protaras sees daily highs of 39°C and lows of 27°C at night. Cap off your sightseeing on the 27th (Tue) early enough to go by car to Nicosia.
more less 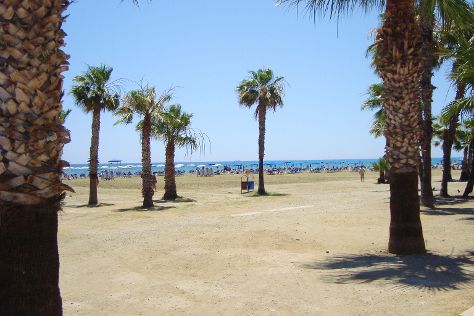 Kick off your visit on the 28th (Wed): explore the historical opulence of Saint Hilarion Castle, choose your vessel at Vela Yachting, and then steep yourself in history at Buyuk Han. Get ready for a full day of sightseeing on the next day: contemplate the waterfront views at Larnaka Salt Lake and then enjoy the sand and surf at Finikoudes Beach.

To see more things to do, photos, maps, and other tourist information, you can read our Nicosia online tour itinerary planner.

You can drive from Protaras to Nicosia in 1.5 hours. Alternatively, you can do a combination of car and bus. Expect somewhat warmer weather when traveling from Protaras in August: highs in Nicosia hover around 43°C, while lows dip to 28°C. Wrap up your sightseeing on the 29th (Thu) to allow time to travel back home.
more less