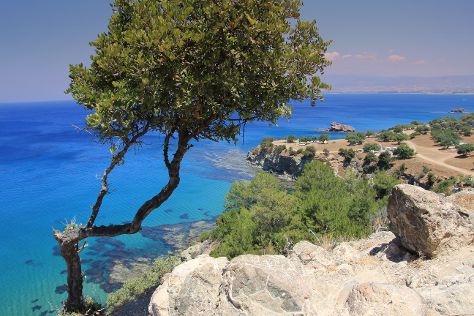 Let the collections at Panagia (Monastery) of Kykkos and Aliathon Gallery capture your imagination. Get a sense of the local culture at Tombs of the Kings and Kato Paphos Archaeological Park. Venture out of the city with trips to Scuba & Snorkeling (in Pissouri) and Akamas Peninsula National Park (in Neo Chorion). There's still lots to do: explore the striking landscape at Aphrodite's Rock, kick back and relax at Coral Bay, admire the masterpieces at Chakra Fine Art Gallery & Culture Centre, and examine the collection at Paphos Ethnographic Museum.

To see where to stay, more things to do, other places to visit, and other tourist information, refer to the Paphos online visit planner.

If you are flying in from United Kingdom, the closest major aiports are Paphos International Airport, RAF Akrotiri and Nicosia International Airport. In February, plan for daily highs up to 21°C, and evening lows to 10°C. Wrap up your sightseeing on the 3rd (Sun) early enough to travel back home.
more less