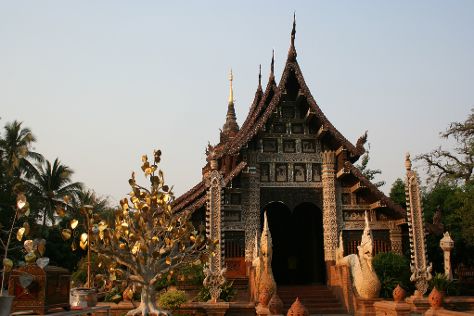 Rose of the North

Discover the diverse history and culture of northern Thailand during a holiday in Chiang Mai, the largest and most significant city in the region.

Your day-by-day itinerary now includes Wat Lok Molee, Wat Si Suphan and Wat Phra Singh. Kick off your visit on the 10th (Wed): take in panoramic vistas at Wat Phra That Doi Suthep, contemplate in the serene atmosphere at Wat Phra Singh, thencontemplate in the serene atmosphere at Wat Si Suphan, and finally take in the spiritual surroundings of Wat Lok Molee. Get ready for a full day of sightseeing on the 11th (Thu): see the interesting displays at Lanna Traditional House Museum CMU.

To see more things to do, ratings, reviews, and other tourist information, go to the Chiang Mai trip itinerary tool.

Quebec City, Canada to Chiang Mai is an approximately 25-hour flight. The time zone changes from Eastern Standard Time (EST) to Indochina Time (ICT), which is usually a 12 hour difference. Traveling from Quebec City in March, expect Chiang Mai to be much warmer, temps between 42°C and 24°C. You'll have a few hours on the 12th (Fri) to wrap things up before traveling to Chiang Rai.
more less

Things to do in Chiang Mai

Wat Phra That Doi Suthep
Find places to stay Mar 9 — 12:
Hotels on TripAdvisor
Homes on Airbnb
Highlights from your plan 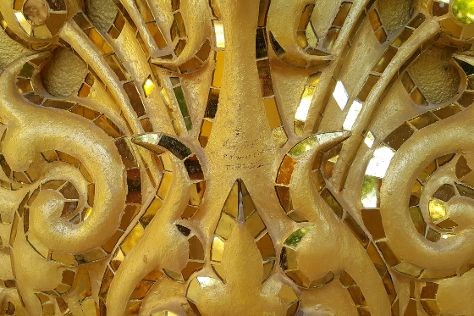 Enjoy a cultural and relaxing vacation in Chiang Rai, the capital city of an eponymous province.

For where to stay and other tourist information, you can read our Chiang Rai day trip planner.

Drive from Chiang Mai to Chiang Rai in 3 hours. Alternatively, you can take a bus. Traveling from Chiang Mai in March, things will get little chillier in Chiang Rai: highs are around 38°C and lows about 20°C. Finish your sightseeing early on the 14th (Sun) so you can drive to Sukhothai.
more less

Things to do in Chiang Rai

The rising of happiness

A trip to Sukhothai is a must for anyone interested in the origins of the Thai empire, which began in this city in the 13th century.

Traveling by car from Chiang Rai to Sukhothai takes 6.5 hours. Alternatively, you can fly; or do a combination of bus, train, and taxi. Traveling from Chiang Rai in March, you can expect nighttime temperatures to be somewhat warmer in Sukhothai, with lows of 28°C. Finish your sightseeing early on the 16th (Tue) to allow enough time to drive to Ayutthaya.
more less

Things to do in Sukhothai 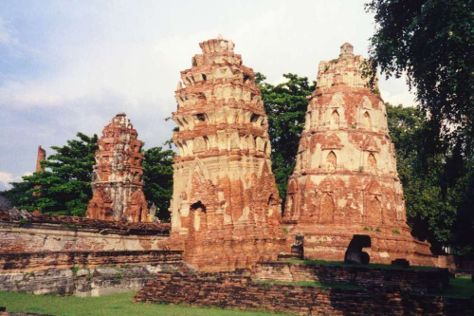 Located just east of the famous ruins after which it is named, Ayutthaya provides the setting for a holiday of historical, natural, and cultural exploration.

Ayutthaya is known for historic sites, shopping, and nature. Your plan includes some of its best attractions: appreciate the history behind Wat Maha That, explore the ancient world of Temple of the Reclining Buddha (Wat Lokayasutharam), steep yourself in history at Wat Yai Chai Mang Khon, and take in the spiritual surroundings of Wat Phra Sri Sanphet.

For maps, where to stay, reviews, and other tourist information, go to the Ayutthaya trip planner.

You can drive from Sukhothai to Ayutthaya in 5 hours. Other options are to fly; or take a bus. In March in Ayutthaya, expect temperatures between 40°C during the day and 30°C at night. Finish your sightseeing early on the 18th (Thu) so you can take a shuttle to Bangkok.
more less

Things to do in Ayutthaya

Enjoy cultural, historical, and culinary exploration during your holiday in Bangkok, the capital of Thailand and the most populous city in the country.

For other places to visit, photos, and other tourist information, you can read our Bangkok trip itinerary app.

Getting from Ayutthaya to Bangkok by shuttle takes about an hour. Other options: drive; or take a train. In March, daytime highs in Bangkok are 40°C, while nighttime lows are 30°C. You will leave for Koh Tao on the 21st (Sun).
more less

Things to do in Bangkok

A holiday in Ko Tao ensures a mix of adventure and relaxation on a fast-developing island in the Gulf of Thailand.

Koh Tao is known for wildlife, adventure, and nature. Your plan includes some of its best attractions: identify plant and animal life at Wildlife Areas, enjoy the sand and surf at Sai Nuan Beach, look for gifts at Flipflop and Treacle, and see the sights as you ascend with a climbing tour.

To see where to stay, maps, more things to do, and tourist information, use the Koh Tao trip itinerary planning tool.

Traveling by flight from Bangkok to Koh Tao takes 6.5 hours. Alternatively, you can take a bus; or do a combination of train and ferry. While traveling from Bangkok, expect a bit cooler days and about the same nights in Koh Tao, ranging from highs of 37°C to lows of 31°C. Cap off your sightseeing on the 26th (Fri) early enough to travel to Krabi Town.
more less

Things to do in Koh Tao 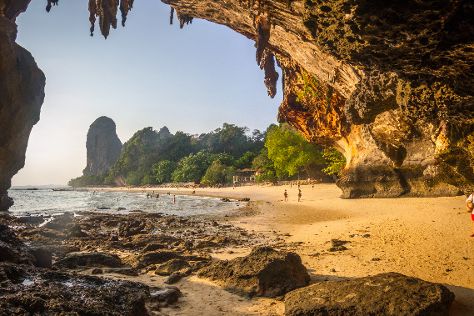 Krabi Town takes you away from the bustle of coastal beach resorts in this region.

To find maps, where to stay, ratings, and more tourist information, go to the Krabi Town day trip website.

Getting from Koh Tao to Krabi Town by flight takes about 6 hours. Other options: do a combination of ferry and bus; or take a bus. Traveling from Koh Tao in March, you will find days in Krabi Town are a bit warmer (41°C), and nights are little chillier (26°C). Finish your sightseeing early on the 27th (Sat) so you can drive to Patong.
more less

Things to do in Krabi Town

Take advantage of nighttime entertainment and daytime relaxation on a Patong vacation.

Explore Patong's surroundings by going to Big Buddha Phuket (in Chalong) and Green Elephant Sanctuary Park (in Choeng Thale). Next up on the itinerary: don't miss a visit to Bangla Road, hit the bull's-eye at Game Space Laser Battle, enjoy the sand and surf at Banana Beach, and tour the pleasant surroundings at Karon Beach.

You can drive from Krabi Town to Patong in 3 hours. Another option is to take a bus. In March, plan for daily highs up to 39°C, and evening lows to 27°C. Finish up your sightseeing early on the 31st (Wed) so you can travel to Ko Lipe.
more less

Things to do in Patong 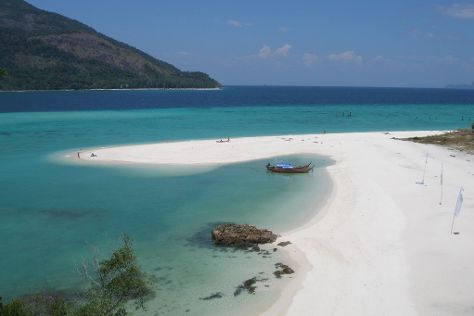 With a name that means "Paper Island" in the local Chao Ley language, Ko Lipe is known for its white sand beaches, historical villages, and diving attractions.

Start off your visit on the 31st (Wed): kick back and relax at Sunrise Beach, thendiscover the deep blue sea with a scuba or snorkeling tour, and then head off the coast to Ko Lipe. On the 1st (Thu), you'll have a packed day of sightseeing: kick back and relax at Sunset Beach, thenenjoy the sand and surf at Sanom Beach, and then enjoy the sand and surf at Pattaya Beach.

To find where to stay, maps, reviews, and tourist information, read our Ko Lipe trip planner.

Traveling by ferry from Patong to Ko Lipe takes 6 hours. Alternatively, you can take a bus. You'll lose 1 hour traveling from Patong to Ko Lipe due to the time zone difference. March in Ko Lipe sees daily highs of 39°C and lows of 30°C at night. Wrap up your sightseeing on the 2nd (Fri) to allow time to travel to Hanoi.
more less

Things to do in Ko Lipe

The capital of Vietnam, Hanoi has bounded back from the effects of war, and today serves as a bustling commercial and cultural hub bursting at the seams.

Hanoi is known for historic sites, spas, and nightlife. Your plan includes some of its best attractions: explore the activities along Lake of the Restored Sword (Hoan Kiem Lake), view the masterpieces at TiredCity Hang Bong, see Off-Road Tours, and get the lay of the land with Walking tours.

You can ride a ferry from Ko Lipe to Hanoi in 11.5 hours. Other options are to do a combination of bus, train, and car; or take a bus. The time zone changes from Malaysia Time to Indochina Time, which is usually a -1 hour difference. Wrap up your sightseeing on the 6th (Tue) to allow time to travel back home.
more less

Things to do in Hanoi