Indisputably one of Vietnam's most atmospheric destinations, Hoi An contains a World Heritage-listed old town boasting over 2,000 years of culture and history.

Kick off your visit on the 13th (Fri): enjoy the sand and surf at An Bang Beach, view the masterpieces at Precious Heritage by Rehahn, and then relax and rejuvenate at some of the best spas.

To find maps, other places to visit, and more tourist information, use the Hoi An holiday planner.

Things to do in Hoi An

Start off your visit on the 14th (Sat): browse the exhibits of OASIS ART GALLERY, then take in the dramatic natural features at The Marble Mountains, and then surround yourself with nature on a nature and wildlife tour. Get ready for a full day of sightseeing on the next day: enjoy the sand and surf at Canh Duong Beach, then admire the masterpieces at 3D Museum Art in Paradise Danang, and then relax and rejuvenate at some of the best spas.

Ask Inspirock to suggest an itinerary and make planning a trip to Da Nang fast, fun, and easy.

Take a shuttle from Hoi An to Da Nang in an hour. Alternatively, you can drive; or take a bus. Finish your sightseeing early on the 15th (Sun) so you can drive to Hue.
more less

Things to do in Da Nang 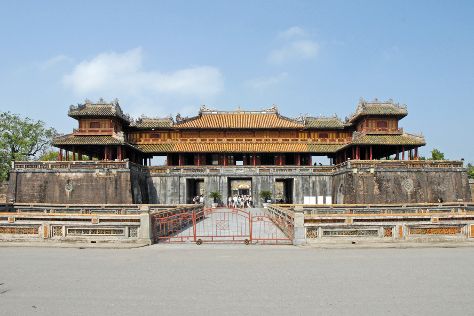 Nestled on the banks of the Perfume River, the city of Hue remains most famous as the former home of the Nguyen Dynasty, the influence of which remains evident in local palaces, temples, forts, and museums.

Start off your visit on the 16th (Mon): contemplate the long history of Imperial City, then explore the ancient world of Royal Tombs, and then steep yourself in history at Imperial Tomb of Dong Khanh. On your second day here, admire the striking features of Thien Mu Pagoda and then delve into the distant past at Nine Dynastic Urns.

For photos, reviews, and other tourist information, you can read our Hue route tool.

Traveling by car from Da Nang to Hue takes 2.5 hours. Alternatively, you can take a bus; or take a train. Expect a daytime high around 26°C in December, and nighttime lows around 21°C. Wrap up your sightseeing by early afternoon on the 17th (Tue) to allow enough time to travel back home.
more less

Things to do in Hue