Explore hidden gems such as The House of Dionysus and Panagia Chrysopolitissa Church. Step out of Paphos to go to Pissouri and see Scuba & Snorkeling, which is approximately 48 minutes away. There's still lots to do: explore the ancient world of Tombs of the Kings, tour the pleasant surroundings at Coral Bay, take a pleasant ride with Horse Riding Paphos - Eagle Mountain Ranch, and explore the historical opulence of Paphos Harbour Castle.

To find reviews, photos, where to stay, and tourist information, refer to the Paphos trip builder tool.

Sofia, Bulgaria to Paphos is an approximately 5.5-hour flight. You can also do a combination of car and ferry. Expect a bit warmer temperatures when traveling from Sofia in April; daily highs in Paphos reach 26°C and lows reach 13°C. Wrap up your sightseeing on the 6th (Sat) to allow time to drive to Pedoulas.
more less

©
The House of Dionysus 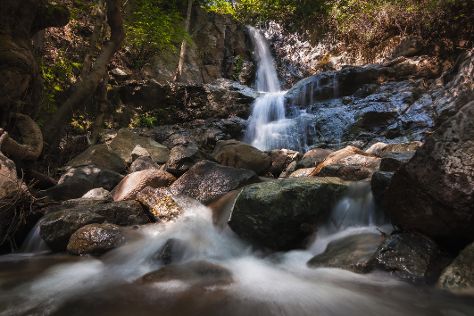 Take a trip inland and visit the village of Pedoulas, a scenic destination tucked in the Troodos Mountains.

Getting from Paphos to Pedoulas by car takes about 2 hours. Other options: take a bus. In April, daily temperatures in Pedoulas can reach 26°C, while at night they dip to 13°C. Wrap up your sightseeing on the 7th (Sun) early enough to drive to Ayia Napa.
more less

Things to do in Pedoulas

©
Painted Churches in the Troodos Region

For where to stay, ratings, more things to do, and other tourist information, read our Ayia Napa itinerary builder app.

Getting from Pedoulas to Ayia Napa by car takes about 2.5 hours. Other options: do a combination of car and bus. In April, plan for daily highs up to 27°C, and evening lows to 14°C. Finish your sightseeing early on the 9th (Tue) to allow enough time to travel back home.
more less