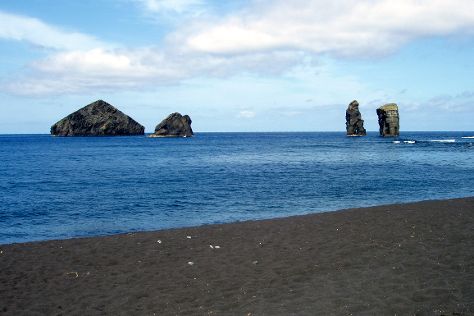 As the busy capital of São Miguel, Ponta Delgada represents the most visited place on the island. Known for its historical buildings, the city offers 17th- and 18th-century convents and churches, as well as cobbled pedestrian streets and hidden squares.

Your list of things to see and do now includes Furnas, Pedra Queimada - Lajinha - Degredo, Praia Calhau D'Areia, and other attractions. You'll explore the less-touristy side of things at Mosteiros Beach and Lagoa do Canario. Get outdoors at Piscinas Naturais and Lagoas Empadadas. Explore the numerous day-trip ideas around Ponta Delgada: Vista do Rei Miradouro (in Sete Cidades), Furnas (OMIC - Observatorio Microbiano dos Acores & Pico do Ferro Viewpoint) and Nordeste (Viewpoint of Ponta da Madrugada & Miradouro da Ponta do Sossego). Next up on the itinerary: trek along Salto do Prego, take some stellar pictures from Boca do Inferno Viewpoint, explore the activities along Lagoa Azul, Sao Miguel Acores, and browse the eclectic array of goods at Mercado da Graca.

For maps, ratings, more things to do, and other tourist information, read Ponta Delgada sightseeing planner.

Toronto, Canada to Ponta Delgada is an approximately 9.5-hour flight. You can also do a combination of ferry and flight; or do a combination of shuttle and flight. The time zone changes from Eastern Standard Time to Azores Time, which is usually a 4 hour difference. Traveling from Toronto in February, expect Ponta Delgada to be much hotter, temps between 19°C and 14°C. Finish your sightseeing early on the 22nd (Sat) so you can travel back home.
more less

Things to do in Ponta Delgada