Situated along the Adriatic Sea, Zadar preserves a medieval old town that is entirely contained on a peninsula.

Start off your visit on the 15th (Wed): don't miss a visit to Sea Organ (Morske Orgulje).

For maps, reviews, where to stay, and other tourist information, read our Zadar road trip app .

Manchester, UK to Zadar is an approximately 5.5-hour flight. You can also do a combination of flight and bus; or do a combination of train and flight. You'll lose 1 hour traveling from Manchester to Zadar due to the time zone difference. Traveling from Manchester in July, things will get somewhat warmer in Zadar: highs are around 36°C and lows about 20°C. Finish up your sightseeing early on the 16th (Thu) so you can go by car to Split.
more less

Things to do in Zadar

Jadro Beach, The Church of the Holy Cross
Find places to stay Jul 15 — 16:
Hotels on TripAdvisor
Homes on Airbnb
Highlights from your plan
©
Scuba & Snorkeling

©
The Church of the Holy Cross

Sportiest City in the World

Experience an authentic Adriatic lifestyle in Split, the largest city along the sea's coast.

Start off your visit on the 17th (Fri): delve into the distant past at Diocletian's Palace, relax and float downstream with a rafting and tubing tour, and then contemplate in the serene atmosphere at Cathedral of Saint Domnius.

For other places to visit, where to stay, reviews, and tourist information, use the Split journey planning tool .

You can drive from Zadar to Split in 2 hours. Alternatively, you can take a bus; or take a train. Plan for somewhat warmer nights when traveling from Zadar in July since evenings lows in Split dip to 26°C. Finish your sightseeing early on the 17th (Fri) so you can take a bus to Dubrovnik.
more less

Things to do in Split

Pearl of the Adriatic

Along the Dalmation Coast, the city of Dubrovnik has become famous for its pedestrian-only Old Town surrounded by fortress walls, and its historical heft has earned it World Heritage Site status.

On the 18th (Sat), take an in-depth tour of Rector's Palace, then head off the coast to Island of Lokrum, then steep yourself in history at Walls of Dubrovnik, and finally wander the streets of Old Town.

For ratings, photos, traveler tips, and tourist information, you can read our Dubrovnik trip planner .

Traveling by bus from Split to Dubrovnik takes 3 hours. Alternatively, you can drive; or fly. In July in Dubrovnik, expect temperatures between 34°C during the day and 24°C at night. Cap off your sightseeing on the 18th (Sat) early enough to go by car to Kotor.
more less

Things to do in Dubrovnik 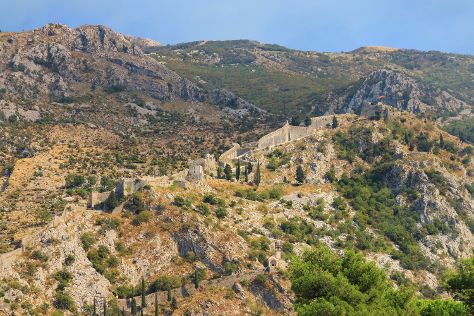 Bride of the Adriatic Sea

Perched on the edge of a fjord-like bay rimmed by rugged mountains, Kotor grew around a medieval settlement purposely built like a maze.

Kick off your visit on the 19th (Sun): contemplate the long history of Stari Grad Kotor, explore the historical opulence of Kotor’s Castle Of San Giovanni, then pause for some serene contemplation at R.K.C. Gospa od Škrpjela, then explore the activities along Bay of Kotor, and finally take in the architecture and atmosphere at Church of Holy Mother Rozaria.

Drive from Dubrovnik to Kotor in 1.5 hours. Alternatively, you can take a bus. Traveling from Dubrovnik in July, plan for slightly colder nights in Kotor, with lows around 20°C. Wrap up your sightseeing on the 19th (Sun) to allow time to drive to Pristina.
more less

Things to do in Kotor

Perast, Castle Of San Giovanni
Find places to stay Jul 18 — 19:
Hotels on TripAdvisor
Homes on Airbnb
Highlights from your plan

Long regarded as a gray and traffic-congested provincial town with little tourist appeal, Pristina today possesses a youthful vibrance and a newfound sense of sophistication, as the result of the city's large community of foreign functionaries.

To find traveler tips, maps, photos, and other tourist information, use the Pristina journey site .

You can drive from Kotor to Pristina in 5.5 hours. Alternatively, you can take a bus. Finish your sightseeing early on the 20th (Mon) to allow enough time to travel to Ayia Napa.
more less

Things to do in Pristina

Medieval Monuments in Kosovo
Find places to stay Jul 19 — 20:
Hotels on TripAdvisor
Homes on Airbnb
Highlights from your plan

For maps, more things to do, where to stay, and more tourist information, read our Ayia Napa tour itinerary app .

Getting from Pristina to Ayia Napa by flight takes about 8 hours. Other options: do a combination of flight and bus; or do a combination of car and ferry. The time zone difference moving from Central European Time (CET) to Eastern European Time (EET) is 1 hour. July in Ayia Napa sees daily highs of 39°C and lows of 26°C at night. Finish up your sightseeing early on the 21st (Tue) so you can go by car to Paphos.
more less

Protaras
Find places to stay Jul 20 — 21:
Hotels on TripAdvisor
Homes on Airbnb
Highlights from your plan

Start off your visit on the 22nd (Wed): explore the ancient world of The House of Dionysus, step into the grandiose world of Paphos Harbour Castle, delve into the distant past at Kato Paphos Archaeological Park, then get a new perspective on things with Boat Tours & Water Sports, then explore the striking landscape at Aphrodite's Rock, and finally delve into the distant past at Tombs of the Kings. Get ready for a full day of sightseeing on the next day: enjoy the sand and surf at Lara Beach, identify plant and animal life at Akamas Peninsula National Park, and then wander the wide-open spaces of Horse Riding Paphos - Eagle Mountain Ranch.

You can drive from Ayia Napa to Paphos in 2.5 hours. Alternatively, you can take a bus. When traveling from Ayia Napa in July, plan for slightly colder days and about the same nights in Paphos: temperatures range from 36°C by day to 25°C at night. Cap off your sightseeing on the 23rd (Thu) early enough to travel back home.
more less

©
The House of Dionysus
©
Scuba & Snorkeling